Process is a fundamental concept in computer science. To understand what a process is, it’s better if we learn a little bit about the history of computer systems first.

In the early 1960s, many computers, such as the IBM 7090, were based on batch-processing. Programmers use keypunch machines to prepare punch cards.

Punch cards can be read by card readers. Card readers transforms the punch cards into digital data and instructions, which will be stored in data channels supported by magnetic tape units (and later, disk).

The data and instructions will be stored in memory, and sent to the CPU for processing. After processing, the output data typically gets printed out by a printer.

The workflow looks alright so far, but problem emerges when a program performs IO operations, for example, handling the printer. Usually, IO operations are a lot slower than CPU, especially when IO is done through cards, magnetic tapes and printers in the 1960s. Even worse, CPU has to wait before IO operation finishes.

Large IO operations result in low average CPU utilization. And low CPU utilization is not ideal, especially considering the high cost of computer systems at that time. To solve this issue, programmers created multiprogramming systems. Multiprogramming systems, like the LEO III, can load different programs into the computer memory. Programs in memory runs on a first-come, first-serve basis. 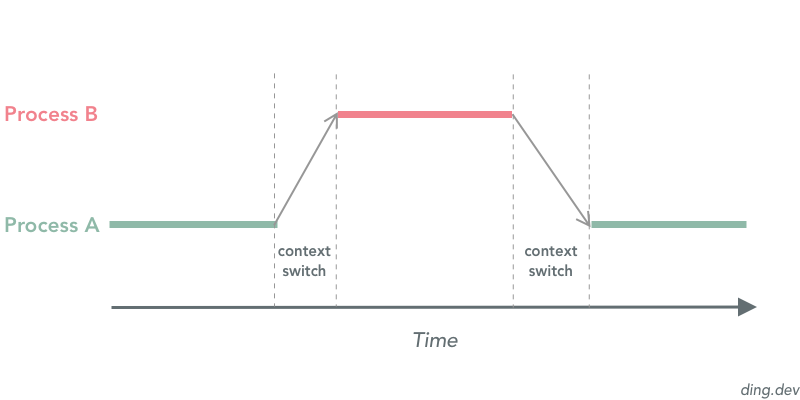 Please note that concurrency is not parallelism. Since CPU is relatively very fast, it does a fine job quickly switching between programs, and provides the end user an illusion that programs are running at the same time. However, a uniprocessor system can only run one program at one point.

To describe a running program with its context, programmers created the term process. A new data structure Process Control Block (PCB) is also introduced by Operating Systems to help manage the processes. A PCB contains critical information on its process, such as process number and process state.

Since the memory holds the context information of processes, how do we make sure the context of multiple processes doesn’t meddle with each other? How do we isolate different processes in the physical memory space? The answer is Virtual Memory.

For example, if I’m working on a text editor, and would like my editor to have a spell-check feature. As my text editor process can only do one thing at a time, there are two ways to implement this feature:

It would be awesome if a process can do multiple things at the same time, right? To solve this issue, IBM created System/360 in 1967, which has an implementation of taskss that allows multi-tasking within the one process. Nowadays, we call this technique Multithreading.

A process can have multiple threads, which share the same code and runs within the context of the process. In the above example, a text editor process may have two threads:

Multithreading played a critical role in web servers. As web servers are usually IO-bound programs with many users, multithreading can help lower the response time of the servers by bringing concurrency to the program. Although multithreading are already efficient than multitprocessing, programmers still actively seek for better approaches to handle IO-bound programs. Modern programming languages implements another technique called Coroutine which further more squeezes the computing resources. I will talk about it in another article.

So we've talked about why Process and Thread are created. Let's sum up their major differences.

Hopefully, this resource helped you understand the differences between Process and Thread. If you have any additional insights that can improve this article, please don't hesitate to let me know.